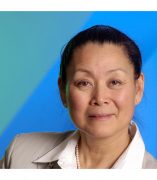 Dianne Chong, PhD, NAE, FASM, FSME was the vice president in the Boeing Research and Technology organization in the Boeing Engineering, Operations & Technology organization. In this position, she led special projects that impacted processes and program integration for the Boeing Enterprise. Prior to this, Chong was the vice president of materials, manufacturing, structures and support in the Boeing Engineering, Operations & Technology organization. In that role, she led the organization responsible for development and support of manufacturing processes and program integration for the Boeing Enterprise. Dr. Chong was elected to the National Academy of Engineering and the Washington State Academy of Science in 2017. She currently serves on the National Academies’ Gordon Prize committee, the steering committee for EngineerGirl, and the Defense Materials, Manufacturing, and Infrastructure Committee. Chong is also serving on the ABET Board of Directors where she represents engineering. In that capacity, she leads the Engineering Area Delegation and supports the Engineering Area Commission. She is the incoming President - elect of ABET. She also serves on the board for the Washington State Academy of Science. Chong is a member of TMS, AIAA, ASM International, SME, SWE, Beta Gamma Sigma, and Tau Beta Pi. She has served on the board of trustees, is a fellow of ASM International, and in 2007 - 08, was elected as the first female president of ASM International. She serves on the ASM Women in Materials Engineering Committee and the ASM Action in Education Team. Chong is currently serving as treasure of the SME, sits on the Board of Directors, and is a fellow of SME. She also serves on SME’s accreditation committee and the Aero Def executive committee. She has been recognized for managerial achievements and as a diversity change agent. Chong was also recognized as an outstanding alumna of University of Illinois in 2006 and is the recipient of numerous technical and diversity awards. Chong has also supported National efforts by leading teams for NAE studies on manufacturing and through her service on the National Materials Advisory Board and the Global Policy Board. Chong received her bachelor’s degrees in biology and psychology from the University of Illinois. She also earned master’s degrees in physiology and metallurgical engineering. In 1986, Chong received her doctorate in metallurgical engineering from the University of Illinois. She also completed an executive master of manufacturing management at Washington University.