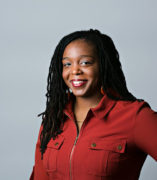 Rachel Harsley is a dreamer, an innovator, and a problem solver. Her father purchased the family’s first computer when she was six, and her love of technology has grown ever since. Rachel received her BS in computer science from Vanderbilt University in 2011. In 2017, she earned her PhD in computer science from UIC, becoming the first African American female to do so. Passionate about helping others, Rachel’s doctoral research focused on a computer-based tutoring system that allows students to collaborate as they learn computer science. She also founded Maychild Technologies to connect small businesses and non-profits to technology solutions. Rachel dedicates time to speak at schools and organizations to promote STEM and inspire younger coders and entrepreneurs, especially underrepresented students. She is a contributor to several online resources including Blacks in Technology and People of Color in Tech. She has been honored with many awards including the Chicago Urban League Women in Tech Award, Illinois Technology Foundation’s 50 for the Future Award, UIC Abraham Lincoln Fellowship, Microsoft NSBE Scholarship, and the Vanderbilt University Chancellor’s Scholar Award. Rachel enjoys technical challenges and has made her mark through significant contributions in software development internships at Google, Intel, AT&T, and GE. She recently began a full-time role at Google as a software engineer. In her spare time, you will find Rachel on a UIC basketball court competing with her friends in pickup games.