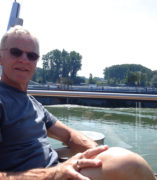 Ken Nelson finished his engineering career as CEO/President of Clark Dietz, Inc., a Midwest consulting engineering company with 150 employees and offices in Indiana and Illinois. He currently provides services as a management consultant specializing in ownership and leadership transitions. He served on the Board of Directors of the American Council of Engineering Companies (ACEC) of Illinois from 1992 to 2005, including serving as President in 2000/2001. He also served as National Director to the national ACEC from 2003 to 2005. Ken currently serves on the Planning Committee of the Village of Ephraim, WI. He also served on the Plan Commission of the Village of Glencoe, IL, including serving as Chairman from 1988 to 1996. Previously, he served on the Architecture and Environmental Committee of the Village of Winnetka, IL and the Plan Commission of the Village of Morton Grove, IL. He has proudly served since 2008 as Chairman of the UIC Civil Engineering Professional Advisory Council and since 2005 on the UIC College of Engineering Advisory Board. Ken is a fellow of the American Council of Engineering Companies and the American Society of Civil Engineers. He served in the U.S. Army Reserves. He resides with his wife, Wendy, in Ephraim, Door County, WI.