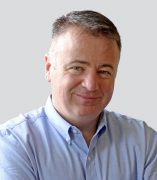 Frank holds a B.S. in Mechanical Engineering from the University of Massachusetts, Amherst and an M.S. in Mechanical Engineering from the University of Illinois, Chicago. While at UIC, Frank studied underneath Sabri Cetin and, after graduation, worked for Sabri’s consulting company. Frank strongly credits Sabri for giving him a solid technical and business foundation that has been instrumental in the success of his company.