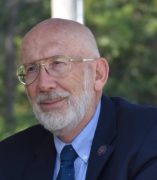 Bill Hawes is currently the treasurer to the UIC EAA after jointly working to restart the EAA. He has filled many shoes in the past year. Bill stepped in this past year as President, helped to realign the Tech Talks, and lead the EAA in a direction of growth. Bill graduated from UIC in 1968 with a BS in Structural Design and then in 1969 with a MS in Material and Mechanics. Bill has worked as a structural engineer for 45 years that include 35 years as President of Hawes Engineers, Inc. Now retired, Bill spends one third of his time at home in Lisle, Illinois, another third in Las Vegas, and the remaining time at his hardwood tree farm in northwest Illinois.

Bill has received the Outstanding Alumni Award from the UIC College of Engineering, the William E. Winter Award for Outstanding Advocate Leadership from the University of Illinois Foundation, and the Distinguished Service Award from the U of I Alumni Association. Bill is a retired Colonel, US Army, Corps of Engineers, and continues to serve his country as an Army Reserve Ambassador.