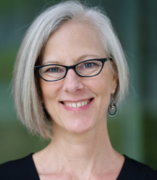 Trina Roy is a senior software developer at Pixar Animation Studios. She started her software career at Silicon Graphics, Inc. prototyping application visualizations before starting at PDI/DreamWorks, where she wrote physics-based simulation code for Shrek (Oscar, Best Animated Feature Film). Trina’s film credits include the snow in King Kong (Oscar, Best Achievement in Visual Effects), the Hall of Prophecies in Harry Potter and the Order of the Phoenix, and the Batpod Emergence in The Dark Knight. She developed procedural vegetation tools for Madagascar, deformation software for John Carter of Mars, and was also responsible for on-set photography for The Dark Knight Rises and Inception (Oscar, Best Achievement in Visual Effects). Currently, she works on RenderMan for Katana, a bridge tool to render the visual effects in many feature films today.

Trina holds an MS in computer science from UIC and a BS from Oregon’s Willamette University. During her time as a graduate student, Trina served as a research assistant in UIC’s Electronic Visualization Laboratory. She credits EVL’s focus on art and science with having a huge impact on how she learned computer graphics, how she cultivated her creative side, and its influence on her professional career and her personal friendships. Today, she actively encourages young women to pursue STEM careers, spreading the word that “science is fun and Geek Girls are cool.”